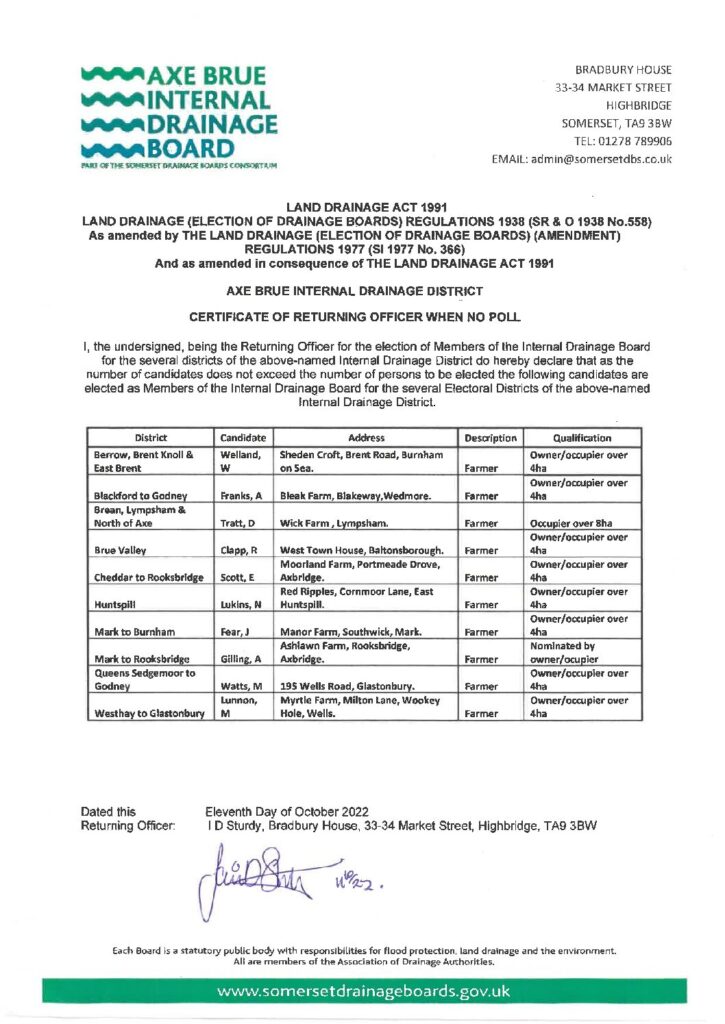 DECLARATION OF RESULT OF POLL 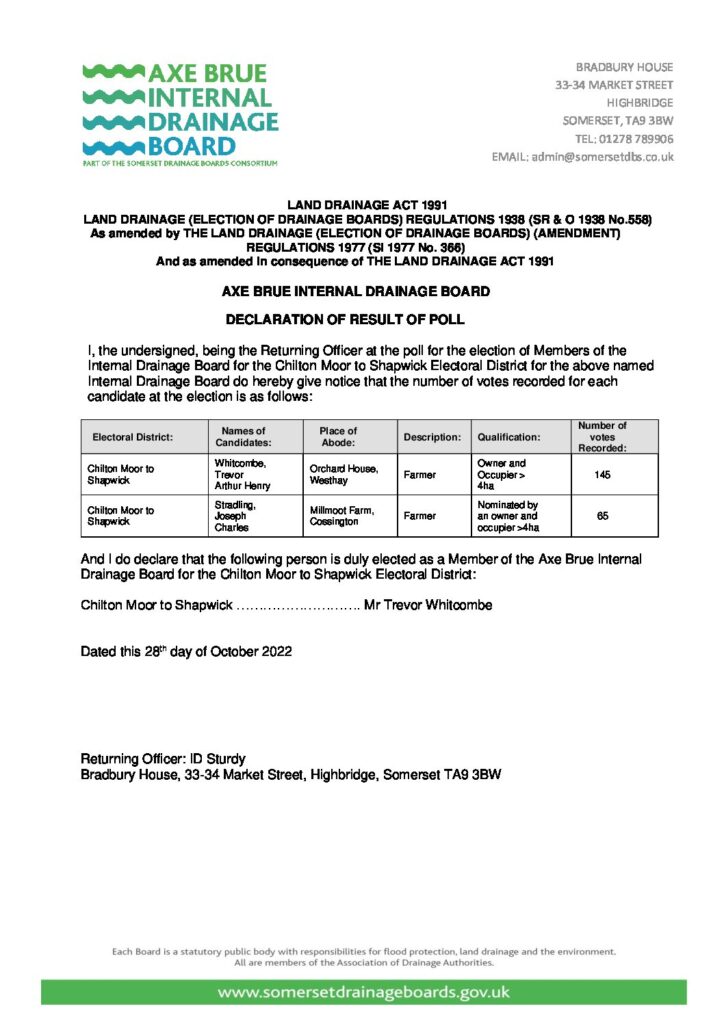 CERTIFICATE OF RETURNING OFFICER WHEN NO POLL 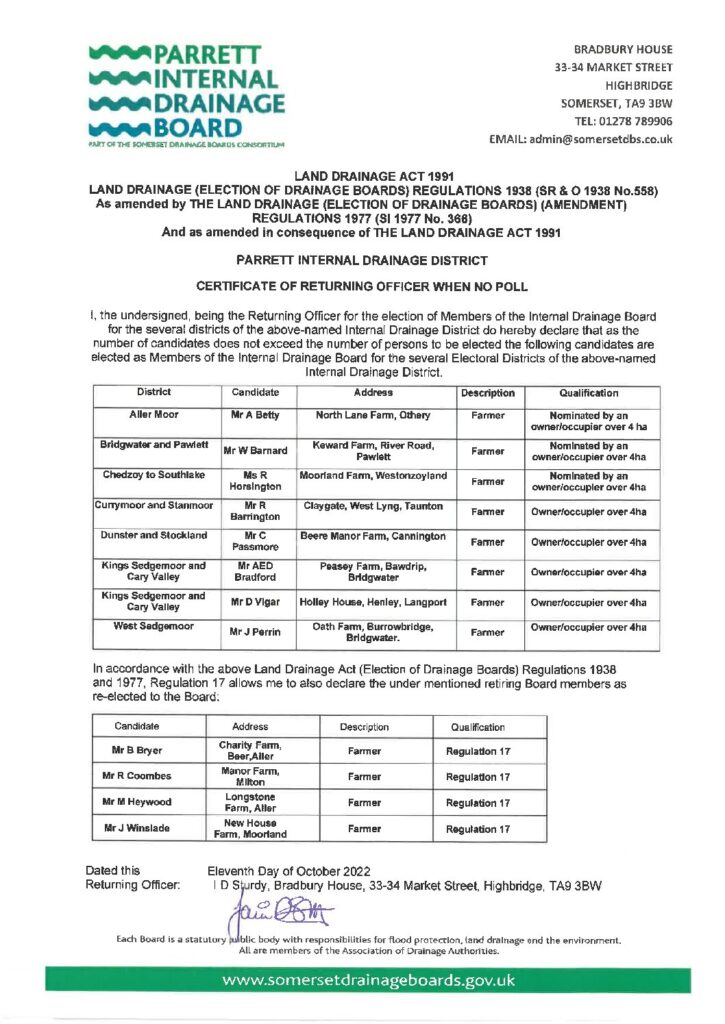 The Axe Brue Internal Drainage Board was constituted in 2012 under the Land Drainage Act 1991.  It was formed by an amalgamation of four existing boards (Lower Axe, Lower Brue, Upper Axe and upper Brue). In July 2018 the Board underwent a reconstitution and is now comprised of 12 elected members and 13 appointed members allocated to two district councils that fund a Special Levy contribution to the Board.  Elections take place on a three yearly cycle. The next election will take place in October 2025.

Register of Members’ Interests forms are available to view by appointment; please call 01278 789906. 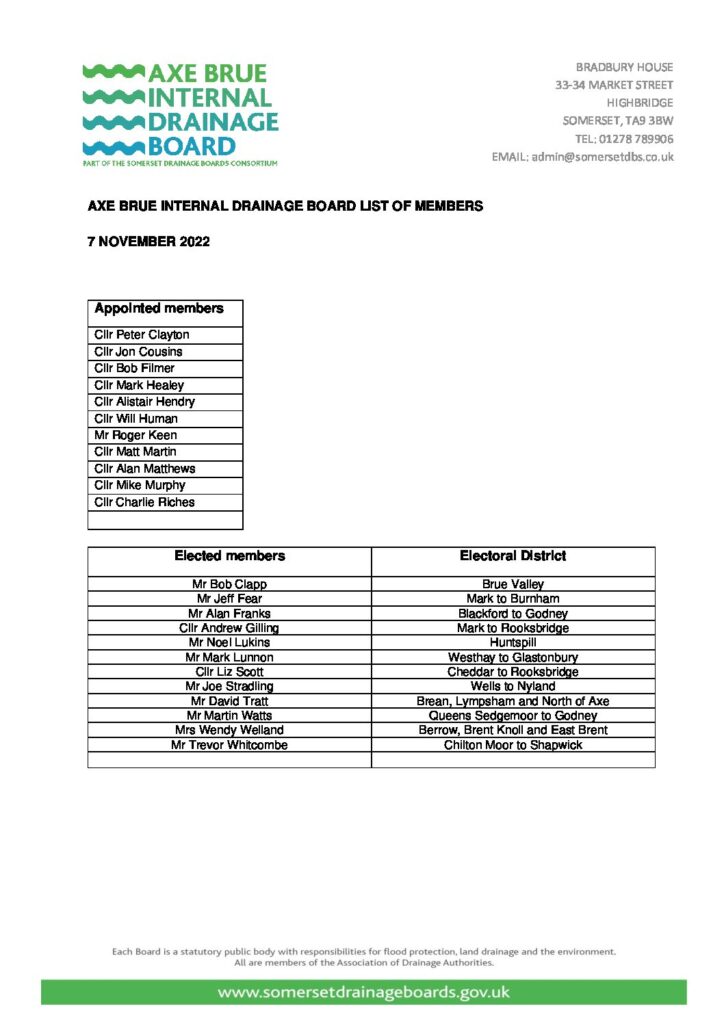 The Parrett Internal Drainage Board was constituted in 2005 under the Land Drainage Act 1991. It underwent a reconstitution in July 2018 and is now comprised of  12 elected members and 13 appointed members nominated to the Board by the District Councils that fund the Special Levy contribution to the Board.  Elections to the Parrett Board take place on a three yearly cycle. The next election will be Nov 2022. Register of Members’ Interests forms are available to view by appointment; please call 01278 789906. Parrett Chair – Mr Tony Bradford. Clerk – Mr Iain Sturdy. 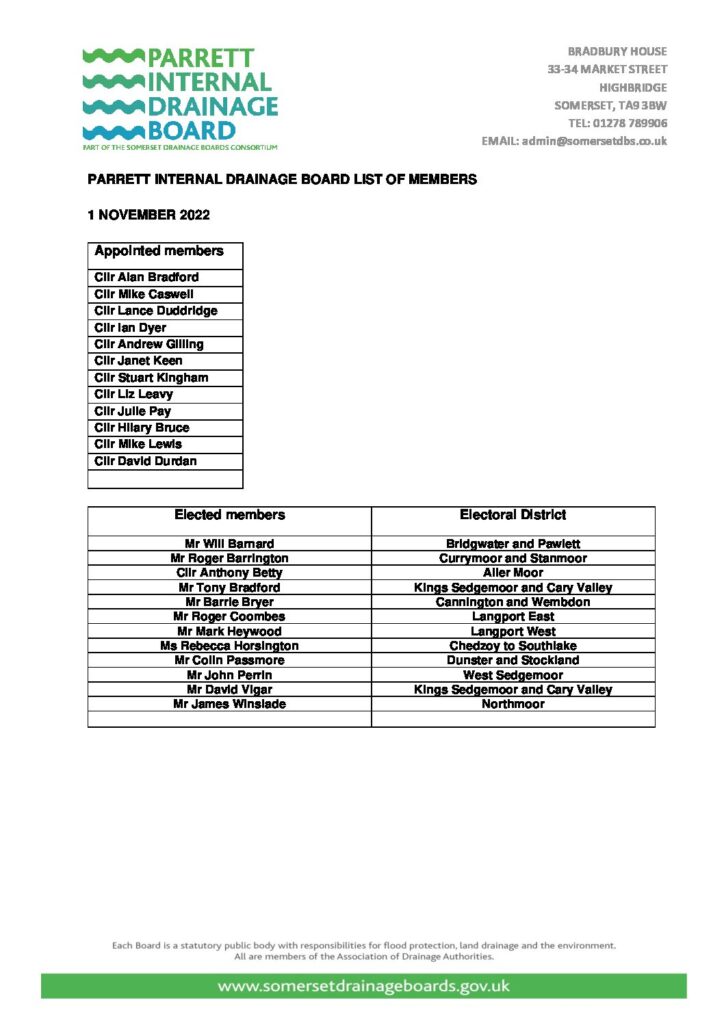 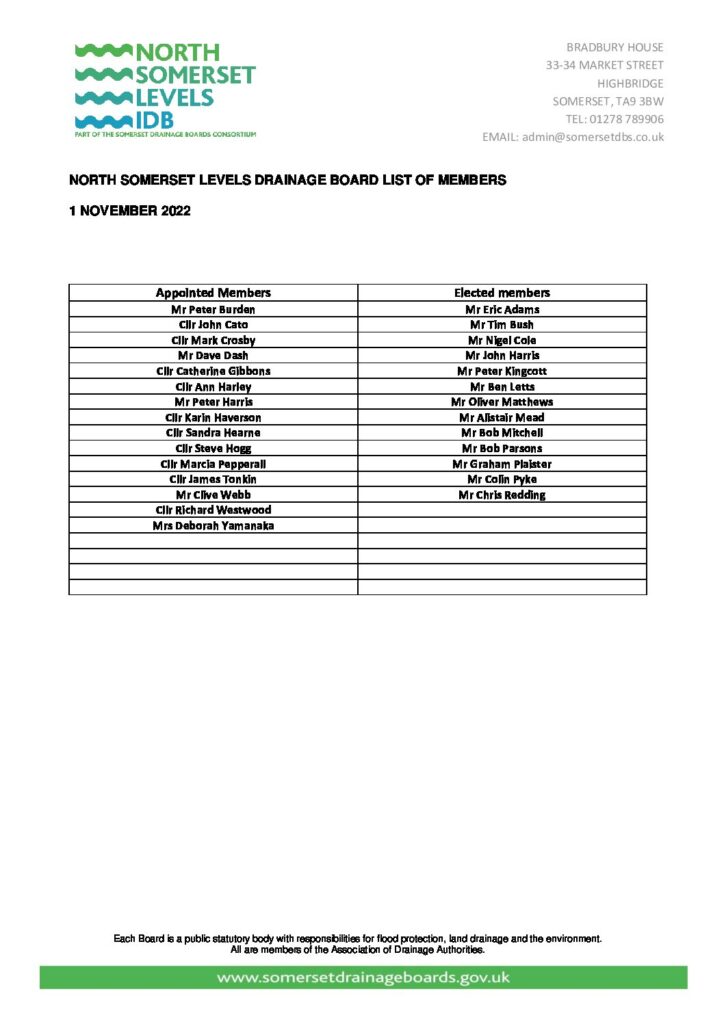 Drainage Boards are independent local public authorities that manage water levels and flood risk where there is a special need for drainage. In Somerset this mainly comprises the area of the Somerset Levels and Moors and the North Somerset levels.

There are up to 12 seats available on each of the Axe Brue and Parrett IDBs which are divided up across either 12 or 11 electoral districts depending on the Board.   The North Somerset Levels has up to 14 elected members but only one electoral district which encompasses the entire district.

If you have an interest in becoming a Board member please look at the electoral district maps below to see where you might be able to secure nomination and support.

Only persons or organisations with agricultural land or agricultural buildings are able to vote in a Board election however larger land holdings are provided with an increased number of votes up to a maximum of 10.  An Electoral Register is operated by the Board which shows the number of votes that every elector is entitled to. The Register is available for inspection by appointment in the Boards’ offices in Highbridge.

Members of the public who live in the area but do not hold or own agricultural land or agricultural buildings are not eligible to vote as their interests are represented by the Appointed Members who are placed on the Board by the local District Council.

If you would like further information about becoming a member please contact the Drainage Board office on 01278 789906.

Appointed members are a relatively recent addition to the makeup of Drainage Boards. Their inclusion followed the 1991 Land Drainage Act and their function is to represent the interests of the householders whose contribution to the costs of a Drainage Board is paid indirectly through their Council Tax payment. This overall payment from the District Council to the Board is termed the Special Levy. However this cost to the District Council is reduced by partial reimbursement received from central government through the revenue support grant.

Qualification to be an appointed member is not restricted to Councillors; anyone with knowledge and experience of matters relating to the functioning of a Board can be nominated, although it must be done through a District Council.

If you have an interest in becoming an appointed member please contact the Clerk of your local Drainage Board.

This website uses cookies to improve your experience while you navigate through the website. Out of these, the cookies that are categorized as necessary are stored on your browser as they are essential for the working of basic functionalities of the website. We also use third-party cookies that help us analyze and understand how you use this website. These cookies will be stored in your browser only with your consent. You also have the option to opt-out of these cookies. But opting out of some of these cookies may affect your browsing experience.
Necessary Always Enabled
Necessary cookies are absolutely essential for the website to function properly. This category only includes cookies that ensures basic functionalities and security features of the website. These cookies do not store any personal information.
Non-necessary
Any cookies that may not be particularly necessary for the website to function and is used specifically to collect user personal data via analytics, ads, other embedded contents are termed as non-necessary cookies. It is mandatory to procure user consent prior to running these cookies on your website.
SAVE & ACCEPT